Connor Scutt has been making waves already, having made a PDC Pro Tour semi-final after just one month as a professional, falling short to Joe Cullen after leading 4-2.

Formerly sponsored by both Unicorn Darts and Performance Darts, Connor has found a new home at Mission Darts, who plan to support his development as a player for many years to come. 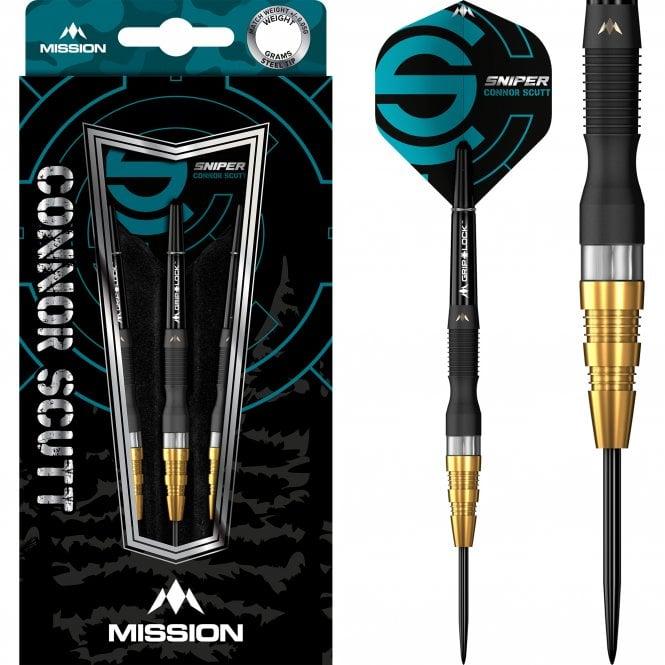 This support has extended to his new darts, which Mission released as part of their 2022 Spring Launch. Connor, alongside Wayne Mardle, revealed the darts on Mission’s launch live stream over on their YouTube channel, which had been viewed well over 2,000 times in the first 24 hours!

I was lucky enough to catch an exclusive chat with Connor regarding his darts, and the development and inspiration behind the barrels!

The darts themselves take inspiration from Simon Whitlock’s Winmau darts, which Connor had used prior to signing with Mission. “The main thought”, Connor informed me, “was to have a dart I can just pick up and throw with no thought required”.

This has been aided by an enlarged central scallop, much like the one featured at the rear of Target’s Haruki Muramatsu Gen 2 darts. When questioned, Connor said that “the groove in the Mission dart has been made to be slightly bigger [than] the Whitlock’s, to allow my thumb to sit perfectly in the scallop.

Connor was quick to dismiss the similarity, stating the “Muramatsu’s weren’t inspiring at all”.

The sole focus of grip is towards the rear of the dart, with thick grooves cut into the barrel, creating a thinner, and as a result more aggressive ring grip. To complement this, the barrels have been sandblasted to increase the grip, something Connor found to be instrumental in the design.

“The black on my dart is sandblasted for better grip in the scallop, but it’s [not] aggressive at all”.

The focus, it seems, was to create a sense of comfort while throwing, as opposed to an ultra aggressive point of contact.

Just past the scallop is a smooth, silver section, which serves little purpose but to extend the barrel length. The section has been cut into the barrel, creating a scallop of its own. The taper has been gold PVD coated, with two sections of grip cut into the barrel, shorter than the rear grip, yet identical in style. While offering a relatively high level of grip, the awkward angle of the extended taper would prevent it from being used as a legitimate grip position.

As for the setup, Connor has truly made it his own. Connor trialled, and then committed to using the new Mission Sniper Ripple 30mm points in black, which offer a high level of board grip, while leaving the barrel as far from the board in order to get around blocked darts. This is particularly important for Connor, as he prefers his darts to sit high in the board, much like fellow professionals Simon Whitlock and Danny Noppert.

While he takes inspiration from Whitlock for the barrels, he draws inspiration from Noppert with the rest of his setup. Scutt uses a short stem, which “is for [the] angle [that the dart sits in the board]”, while he uses a kite flight, as Noppert does, to truly kick the dart up. The short setup also means Connor reduces the risk of touching his face with his flight when drawing back the dart, allowing him to then pull the dart back further than with a medium stem.

For a 95% branded player dart, £59.95 is a reasonable price given the current market. Both sandblasted and gold PVD coated, the darts are truly a work of art. If you wish to complete his full setup, it’ll set you back a further £19.50, with both the Mission Sniper Ripple points and Connors L-Style flights priced at £7.50, while standard black L-Style stems are £4.50.

A huge thank you to Mission for sending Connor’s darts out to me, as well as thank you to Connor himself for answering my questions. Having met Connor a few years back at the World Masters, I know firsthand his determination to reach the top of the sport. We will follow his progress with great interest.

Before I end this review, I will leave you with an image, and a question to accompany it…

Has there ever been another player to change their setup this drastically between their first, and second branded darts?